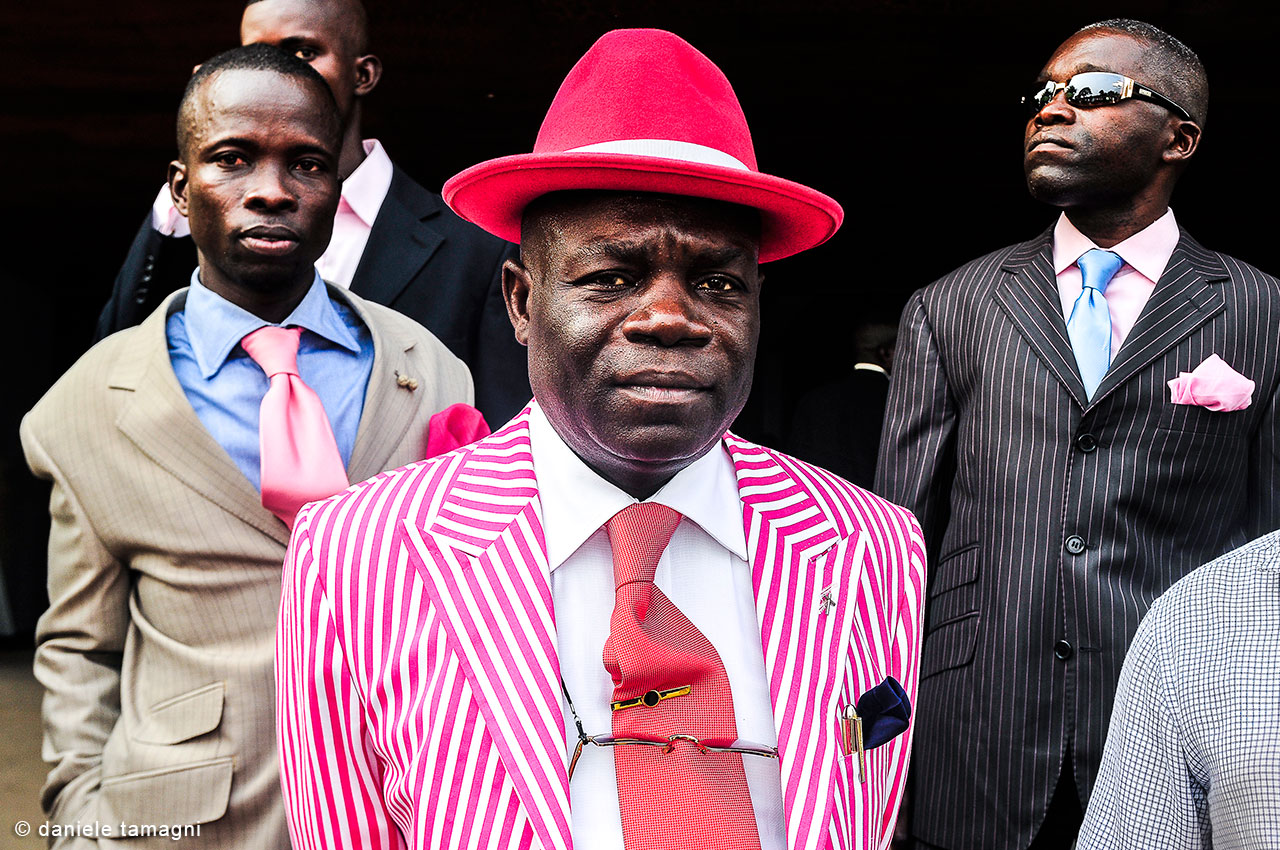 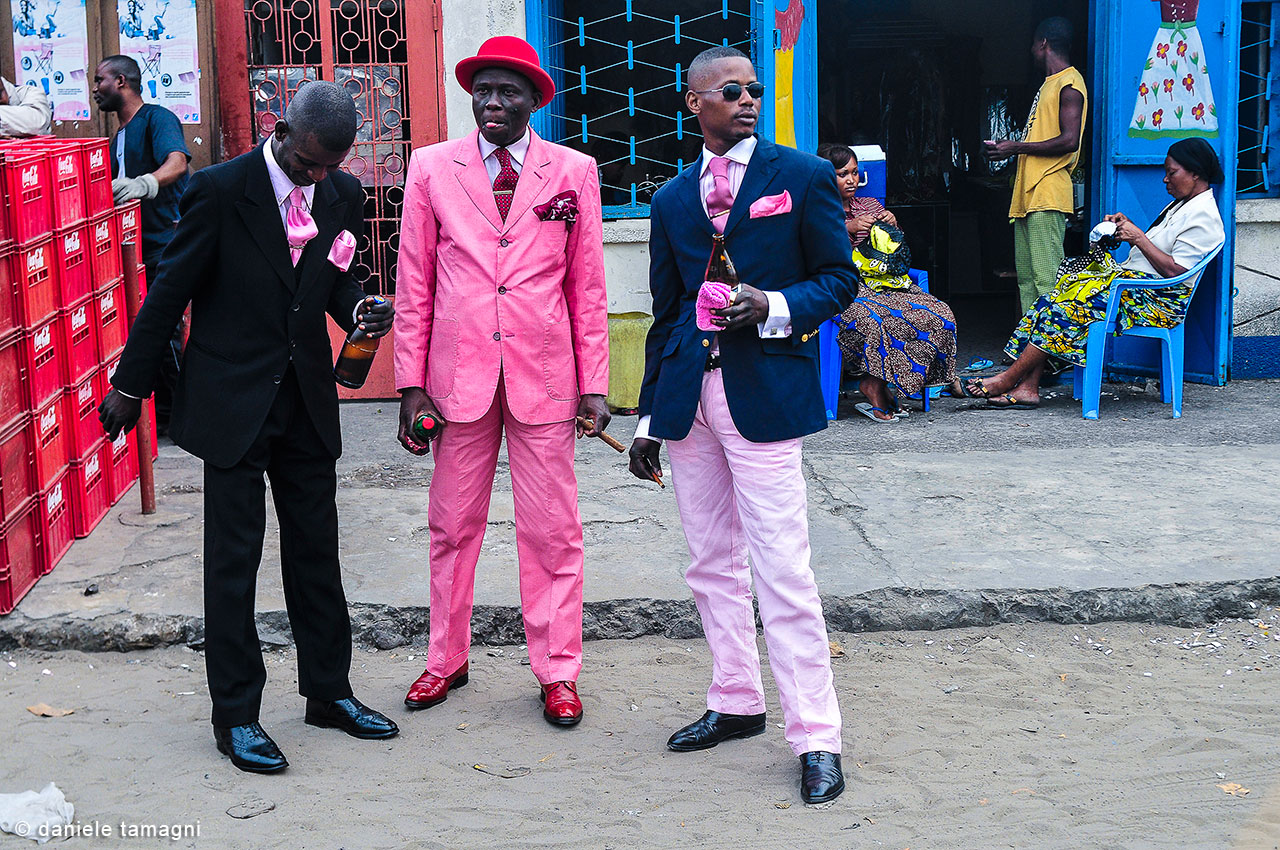 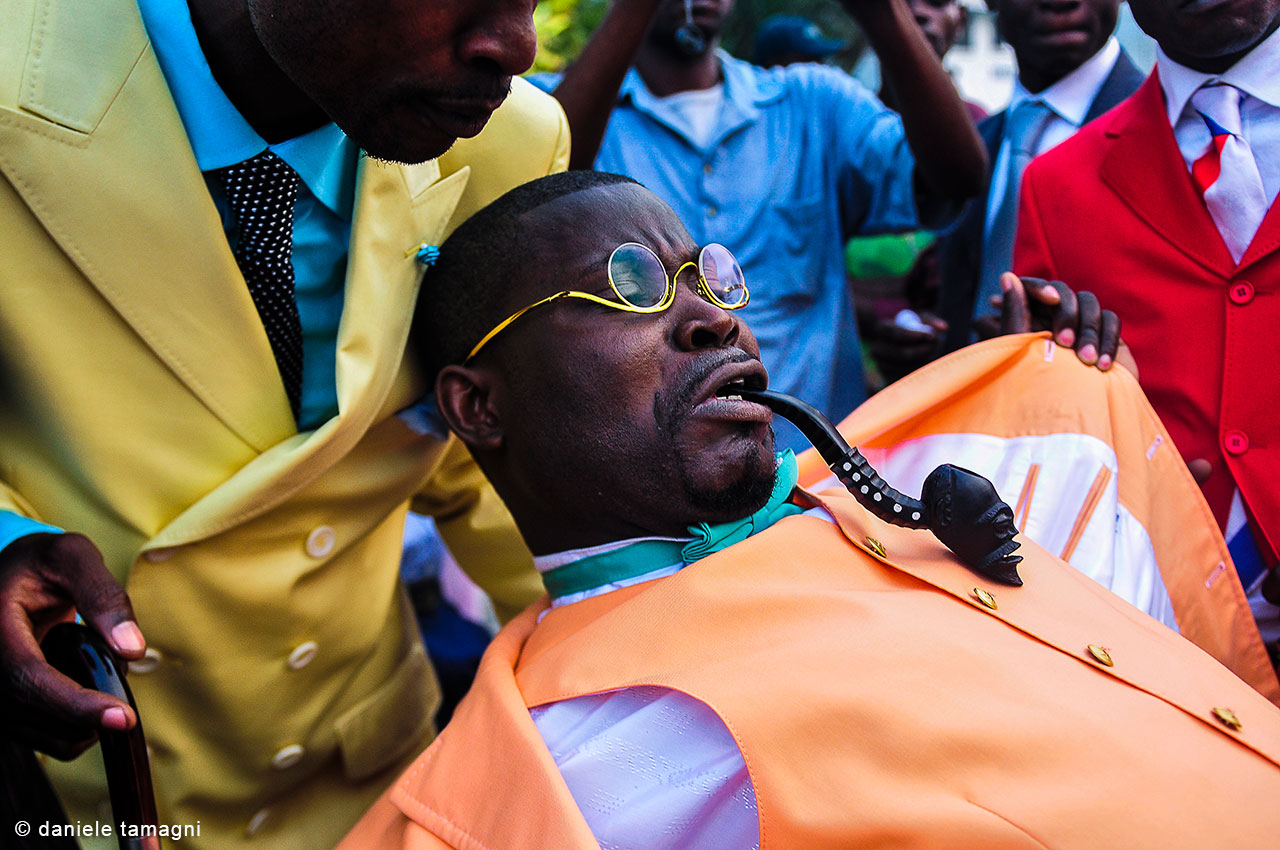 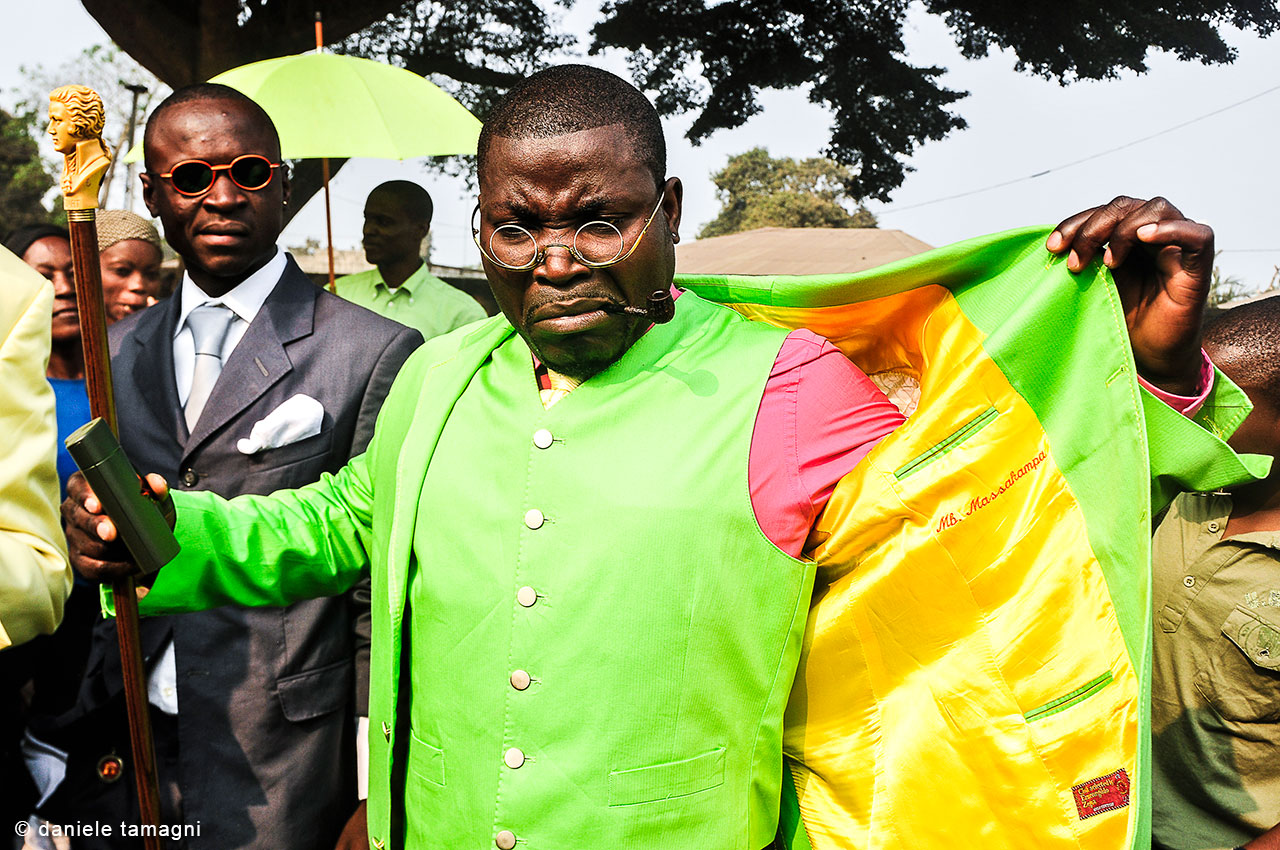 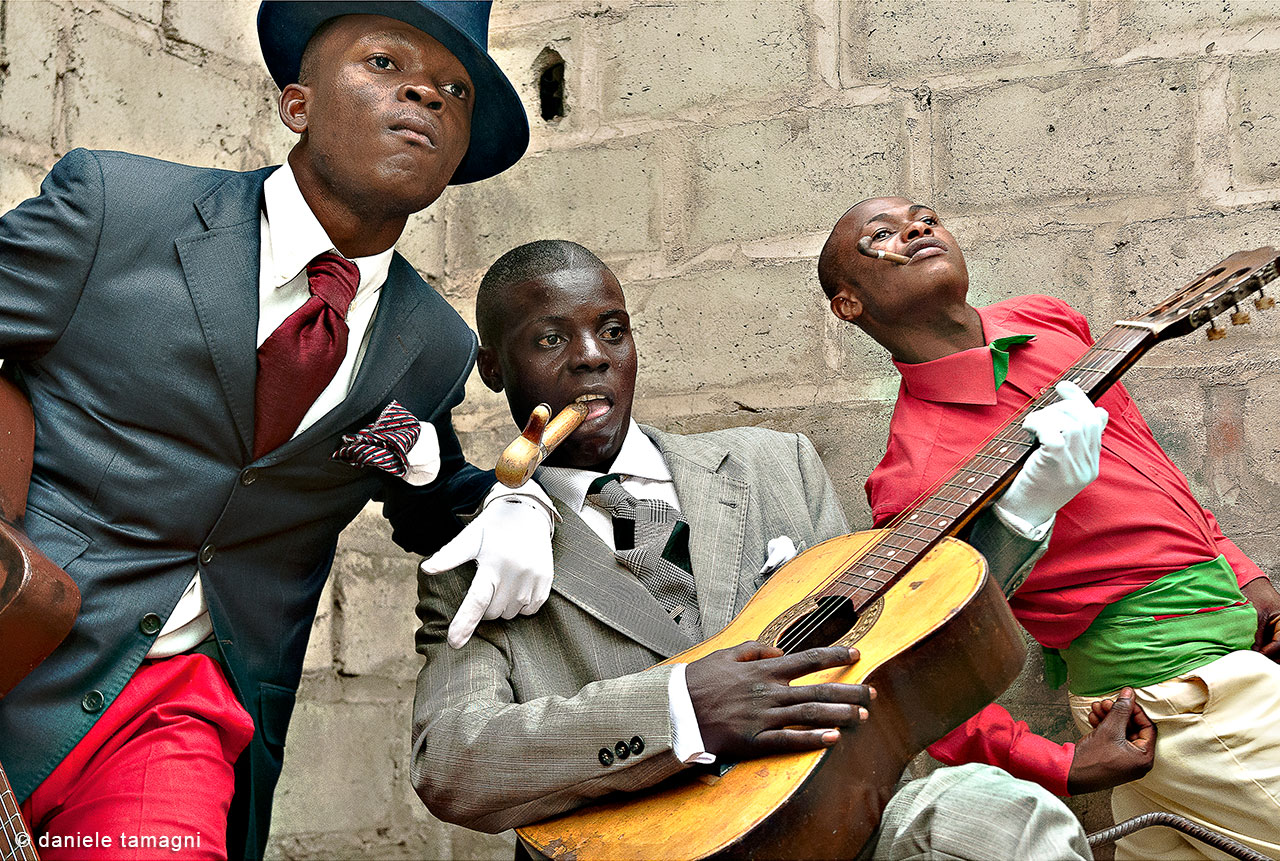 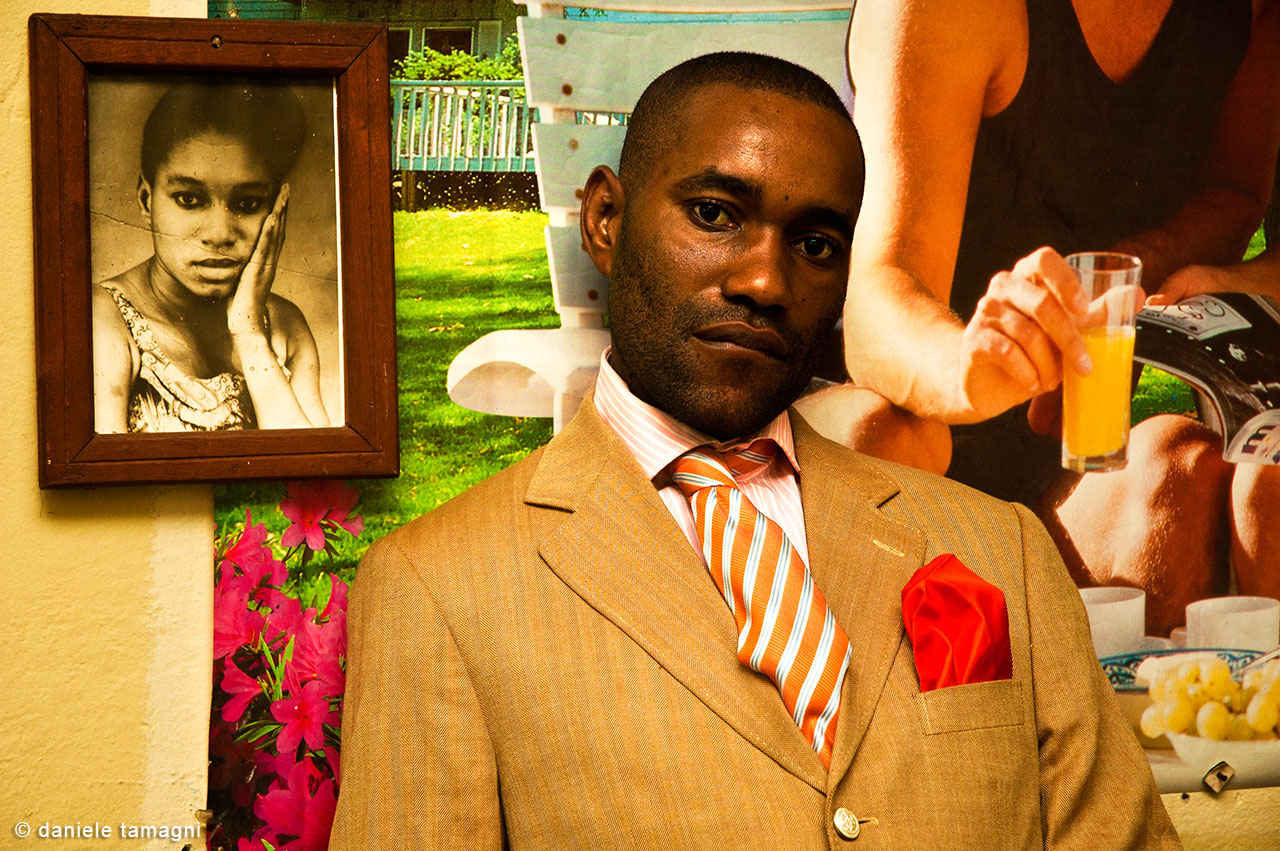 Gentlemen of Bacongo is a series of photographic portraits and scenes of sapeurs—the members of the SAPE (Societè des Ambianceurs et des Personnes Elegants) (The Society of Ambiance-Makers and Elegant People)—taken in Bacongo, a poor district in Brazzaville, the Republic of the Congo’s capital city. This society, which professes an almost religious devotion to fashion (and has its own rules of ethical behavior), has spread from there to the neighboring Democratic Republic of the Congo, and even on to the Congolese immigrant communities in Paris and Brussels.
Originally founded as an all-male society, the SAPE has now expanded to include women as well. The French idiom “sapeur” means “big spender,” but its sense has evolved with the growing presence of the sapeurs and now refers to anyone who dresses with elegance—and it is used as a pun on SAPE.

The sapeurs, dressed in clothes that confront accepted standards and that are sometimes tailored by leading international brands, rise in stark contrast to their social environment. The way they choose and combine their outfits looks picturesque, but it acts as a creative expression of local tastes, attitudes, and aesthetics that favors the use of bold colors cheerfully combined. Their style involves the theatrical posturing that befits the dandy and the studied poses of the fashion model. All this is beautifully conveyed by Tamagni, who was able to make the sapeurs feel comfortable enough to pose in spontaneous ways for his photographs.

Tamagni’s work captures the contrast between the sapeurs sartorial splendor and their environment, achieving a unique combination of heterogeneous fashion photography and social reportage.

The cultural phenomenon of the sapeurs so neatly captured by Tamagni is clearly controversial. It may be dismissed as a feckless waste of money, as male exhibitionism, or as a surrendering to Western values and the dictates of the international luxury market. Such critical judgement is valid, but it is not expressed in Tamagni’s approach to the sapeurs… it reflects a close relationship with the people that he photographs and their environment, and as a result his series conveys a complex understanding of their costumes and values. He is not a voyeur but an artist who delves deep into the context in which he works.

African dandyism reflects the importance of aesthetics as a basic human need, and of fashion as a space for transgression, in terms not only of its design but also of its varied and inventive uses.